“What is your favourite game?” must be the most frequently asked question game designers deal with when talking about games. How come, after having made up countless answers throughout the years, it is still so hard to find a satisfying answer?

Because the question is flawed.

Games are eclectic, impossible to group and even harder to compare. Genres range from keeping immense megalopoli afloat to racing through abstract figments of someone else’s mind at breakneck speeds. 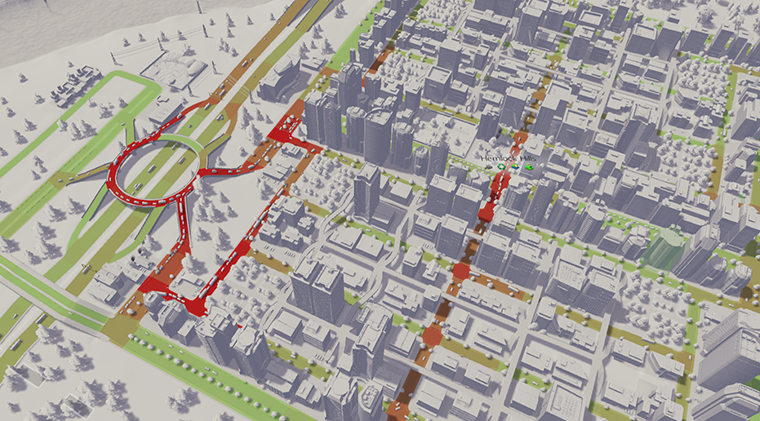 Image: “If I increase the budget of bus line 95, will I be able to ease the congestion of that intersection?” 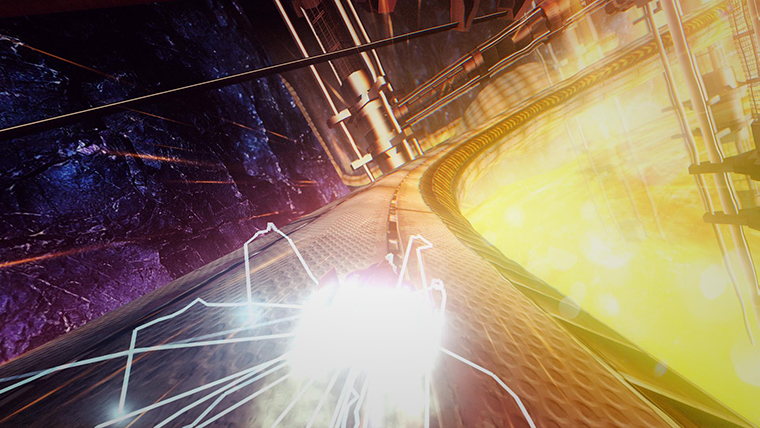 Different games for different states of minds, times of day and people around you. How can one expect to choose between that?

Going further, a single game often contains a host of elements, both good and bad. Tell me, which is better: The game that you were unable to finish due to bland dialogue, even though the core gameplay loop is satisfying and universally acclaimed? Or the game with the ridiculed combat system of which the story brought you to tears upon completion?

A game can excel in one element or only cater to a specific situation whilst totally missing the mark elsewhere; we must take that into account. Let’s stop looking at games as large singular rocks but hack down into them and uncover the gems inside them that are actually responsible for those nostalgia-fuelled memories played games are able to evoke. The memories that, up until now, have been mistakenly attributed to your 'favourite games’.

A game gem is attained through examining a specific experience created by a game through chipping away at all aspects that do not contribute to this experience and isolating only what is responsible. What remains is the gem: A combination of elements/mechanics that contribute to the specified experience.

One game may contain a host of different gems depending on who you ask and what that person is looking for in a game. Some of these gems consist of a single mechanic, whilst many of them are multifaceted. This is my list, containing a selection of gems that have affected me personally and were, in one shape or form, paramount in shaping the games I’ve worked on.

The Arsenal of Half-Life 2

An orb of death that erratically bounces through the room taking out whatever it touches, a pheromone pod that makes enemies do your bidding and the legendary crowbar. Don’t even get me started on the Gravity Gun...

Many games have weapons, but few have a range as gratifying as Half-Life 2. This is why:

Image: If you haven’t punted a toilet at someone with the Gravity Gun, you’ve missed out on a historical moment in gaming.

The World Design of BioShock Infinite

Game environments are often mere backdrops of the game that is being played. An abstract rendition of a factory with indistinct moving parts and loading screens that jump the player between physically unlinked areas.

Though a lot a games are steadily progressing away from this, BioShock takes it a step further by presenting an environment that is masterfully woven both into the narrative and certain game design decisions. As a result, we have a convincing world that has people fantasising about how living in a world like this might feel.

Note: I have chosen to focus mainly (though not solely) on BioShock Infinite for this gem, as I believe this gem has only improved as the series has progressed.

Image: Battleship Bay is a prime example of this gem.

BioShock’s world design is at times so successful that there have been points where I just wanted the combat to end so that I could continue exploring the setting and progress the story. It’s up to you to decide if that is a good thing for a video-game. From a world design perspective, BioShock has achieved something exceptional.

A game is usually a complex union of systems that work together to create an entertaining gameplay loop. Carefully crafted to include ups and downs, a challenge throughout and ample hooks to keep you interested for the required amount of time. Remove this and not much is left.

Unless we are talking about TrackMania.

Outside of the main gameplay loop that is a tight and simple arcade racer, TrackMania provides both an in-game level editor that anyone can use to make levels, and a multiplayer mode that puts these custom levels mere mouse clicks away. There is no quality control and when I said anyone can make these levels, I mean ANYONE. 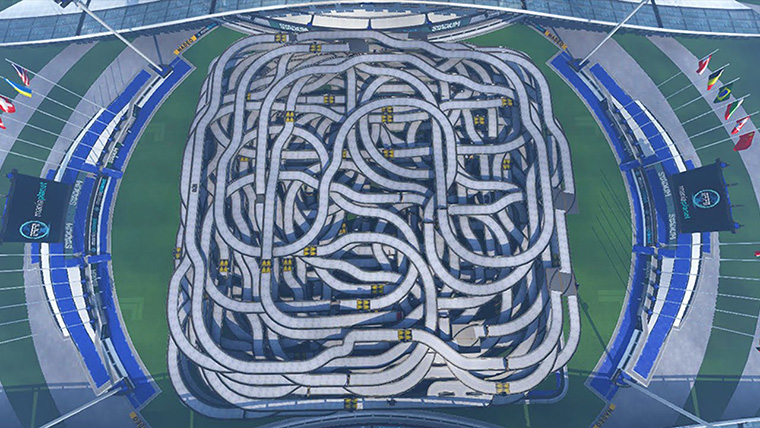 Image: “What a stupid level. When do we start!?”

TrackMania is a lawless place, a refuge for an endless amount of content, where anything is acceptable and you never know what to expect. Tracks range from mind-bogglingly complex snakes that loop in on themselves, to near impossible stunts that, if done right, can be completed within mere seconds. Anything goes, and as a result there are tracks out there where you just press forward, tracks that are infuriatingly maze-like and story tracks that use a plethora of custom sound effects, janky camera angles and incredibly jarring on-screen text.

Most of these things are ‘not done’ in a regular racing game and a valid cause for frustration. In TrackMania it’s funny. I recall being on a LAN party where everyone had twenty minutes to create a track and we would bundle them all up in a playlist and play them together. The differences in the types of track were phenomenal. Some were really good; some were just awful. But nobody cared: It was a blast!

Give the people an open platform to express themselves and leave them to themselves. Relinquishing control and letting the untrained public ‘mess it all up’ may seem like a nightmare…

…but in TrackMania it works.

Note: This gem was conceived with the very first TrackMania game and was preserved throughout the series’ evolution.

Mastering the Unknown in Bloodborne

My palms are sweaty, knees weak, controller heavy as ‘Prey Slaughtered’ appeared on the screen. In this moment, I’ve got to admit: I shouted. Defeating a boss in any of the SoulsBorne games feels like an actual achievement akin to hearing the person you asked out would love to go out sometime or performing that elusive 360 kick flip!

How does From Software do it?

By creating a game where the gameplay, the level design and the setting work flawlessly together to make players feel either out of their depth, or in control.

Putting these points together results in a game that is a testament to working towards a singular design pillar and maintaining pinpoint focus on achieving this pillar throughout the development process.

The Visceral Rush of Need for Speed: The Run

Another racing game, another gem. This one, however, couldn’t be further apart from TrackMania:

The licensed music amping up the mood, immense destructible set-pieces, controller rumble and motion blur. Combined with a single racetrack spanning the two North American coasts creates a sensory experience that no other genre does. 230 KP/H, speeding into a tunnel – the sound goes underwater and your engine echoes from the walls – bright yellow lights flash along your retina at a consistent pace. The trance is broken as you are met with a blinding white light as you emerge back outside, hurtling along a windy cliff side road. What’s that red and blue dance along the vinyl of my car? Oh shi-, no time to enjoy the scenery… It’s the cops!

Need for Speed: The Run is a thrill that is all about feeling. Save your brainpower for something else. Here the only things you will need are a big screen, a surround sound system with solid subwoofer and willingness to give in to the ride.

During the time I was immersed in World of Warcraft, it was full of memorable moments. Shared memories where avatars connected and, over time, actual friendships were born. People grouped up from all over the world and started exploring uncharted areas and vanquishing indomitable foes. On the popular Player-versus-Player realms leaving the safe starting areas may even result in a personal vendetta when that 'shared moment' is being killed by someone from another faction in Stranglethorn Vale.

Even now, thinking back to my times in Azeroth, a lot of fond memories spring back to life, clear as day. I remember the people, and I’m certain someone far, far away, having moved on and living their life, still knows me.

Of course, this is all by design. This is what created these memories:

Note: This is about the systems of World of Warcraft present on its release in 2004. The systems I mention have evolved over time, or have in some cases been removed altogether to cater to an evolving audience. 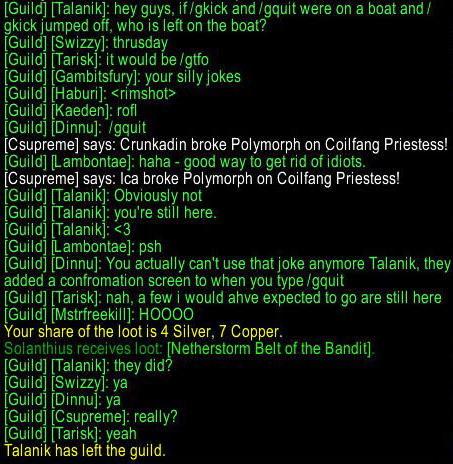 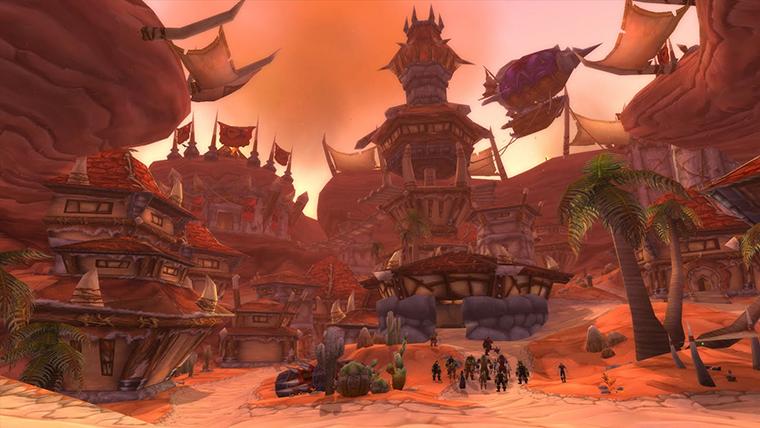 Social contact is a powerful thing and can make a game experience genuinely meaningful. Game designers have a lot of power in dictating how communication is done and as a result, the designer becomes the director of these interactions. Blizzard knew this and has designed WoW’s systems accordingly.

The Start of Civilization V

The promise of creating a timeless legacy, be it through uncompromising conquest, deceitful scheming or sheer wit. That’s how it starts, full speed ahead to reach the stars. However somewhere between the Steam Power and Atomic Theory something feels absent. I want to start again. And do it differently this time…

Don’t deny it. You’re getting that itch too.

There is a lot of stuff going on that makes the start of Civilization feel so special and appealing, but it can be narrowed down to uncertainty and choice:

Image: The tech-tree allows the player to come up with long term goals.

When the game progresses and most of the map is charted a lot of this ceases to exist. Plans can no longer be changed and colonies have started to envelop each other creating friction around the globe. A tactical layer remains and what I’ve spent countless turns working on is within reach. But I just want to start again.

This is a just a handful of the many gems that spring to mind when I initially started work on this article. Keep in mind that gems are going to be different for everyone and the experiences listed above have been chosen solely because they had a meaningful impact on me.

Think for yourself: “What are your favourite games?” Now ask: “Why is that the case?” Maybe it’s building a base in Red Alert 2 that features both Allied and Soviet units due to capturing an enemy construction yard with The Engineer or the Battle-lines that form when playing 3-v-3 online in Dawn of War II.

When a gamer actually starts thinking about what makes a game fun, it can be hard to define and be the result of a gut-feeling. Us game-designers know better: There are very specific elements in a game that, if done correctly, work together like a well-oiled machine to create an entertaining experience that stays with us forever.

Thanks for reading! Feel free to contact me for questions, comments and discussion.